Comprised of seven musicians, Belle and Sebastian are led by singer/guitarist Stuart Murdoch. Like many front men, Murdoch has a unique story that is perhaps best revealed by listening to his melodic and thought-provoking music. Before forming the band, Murdoch suffered unique challenges in his life with a condition known as Chronic Fatigue Syndrome. After dropping out of school and remaining in his parent’s home for several years, Murdoch created a short story about a boy named Sebastian and a girl named Isabelle (this story was influenced by Aubery’s children’s book Belle et Sebastian).

Stuart is known for his poetic lyrics and has clearly used his own life in many of his songs. The initial emergence of the band’s success began with two albums released in 1996 (Tigermilk and If You’re Feeling Sinister) . The music press attempted to tie their sound to chamber pop, but the guys in the band would prove to be unique in how they handled their growing fame. They didn’t follow the well-trodden path of predictable venues, and would often perform in locations such as libraries, coffee shops, people’s homes, and even churches. This was a difficult time for an indie folk group to get noticed, as the music scene in Britain was dominated by bands such as Oasis and other derivative crap. With popular music in Britain becoming more predictable as the millennium approached, Belle and Sebastian tread their own path. They would often restrict press exposure, and continue to forge their own path into the consciousness of indie music lovers. 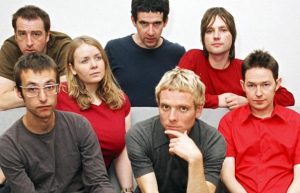 Their music is often compared to such luminaries as The Smiths and Nick Drake. They clearly come from a long list of Scottish bands who have achieved relative critical and commercial success such as: Teenage Fanclub, The Fratellis, Franz Ferdinand, Frightened Rabbit, Idlewild, Travis, The Vaselines, Glasvegas, and Arab Strap. Listening to the music of Belle and Sebastian will take you to strange places, and lovers of intellectual songwriting and dark lyricism will enjoy the distinct visions and imagery that the band can create. Many of their fans are likely happy that the band have not become more mainstream, as they have managed to keep intact their sound and attitude without sacrificing anything for profit.